It's not often that I come across an ingredient that I've never heard of before, let alone one that is considered local.
Reading Alma's wonderful post on Jerusalem (Warning: Hebrew), I became intrigued with the vegetable she called "Faquz".
After some Googling, it appears that what Jerusalamites call "Faquz" or "Faqouz" and the rest of Israel calls "Faqus", "Arabic Cucumber" or "Palestinian Cucumber" is a local version of the Armenian Cucumber, and that it's in season now.

It being exam period in Tel Aviv university and my having a big exam two days from now, this was the perfect excuse to procrastinate, so I got up and went to the Carmel market to see if the produce stalls have any in stock.

When I got there I headed for the Arabian stalls next to the Carmelit and was informed by the local stall owners that they're fresh out and that I might have better luck closer to Nehalat Binyamin. The stall owners there told me they don't carry Faqus but that maybe closer to the center of the market I might find something.
As I slowly honed in on one specific stall I also bought some figs, mint and, to my surprise, lime. It's either suddenly in season, or just that I've never noticed it before, but I was really happy to find some. And if there's lime, there's calls for ceviche, so I also bought a small trout.

Anyway, after touring up and down the Carmel market, passing several Taglit groups that were simply fascinated by the plastic junk gizmos and the stupid tourist t-shirts on sale, old women arguing with fishmongers and the Davka Gourmet cheese shop (which I don't buy at after seeing they label their Gruyere cheese as French in origin)  I found these babies nestled between some cucumbers and sweet corn: 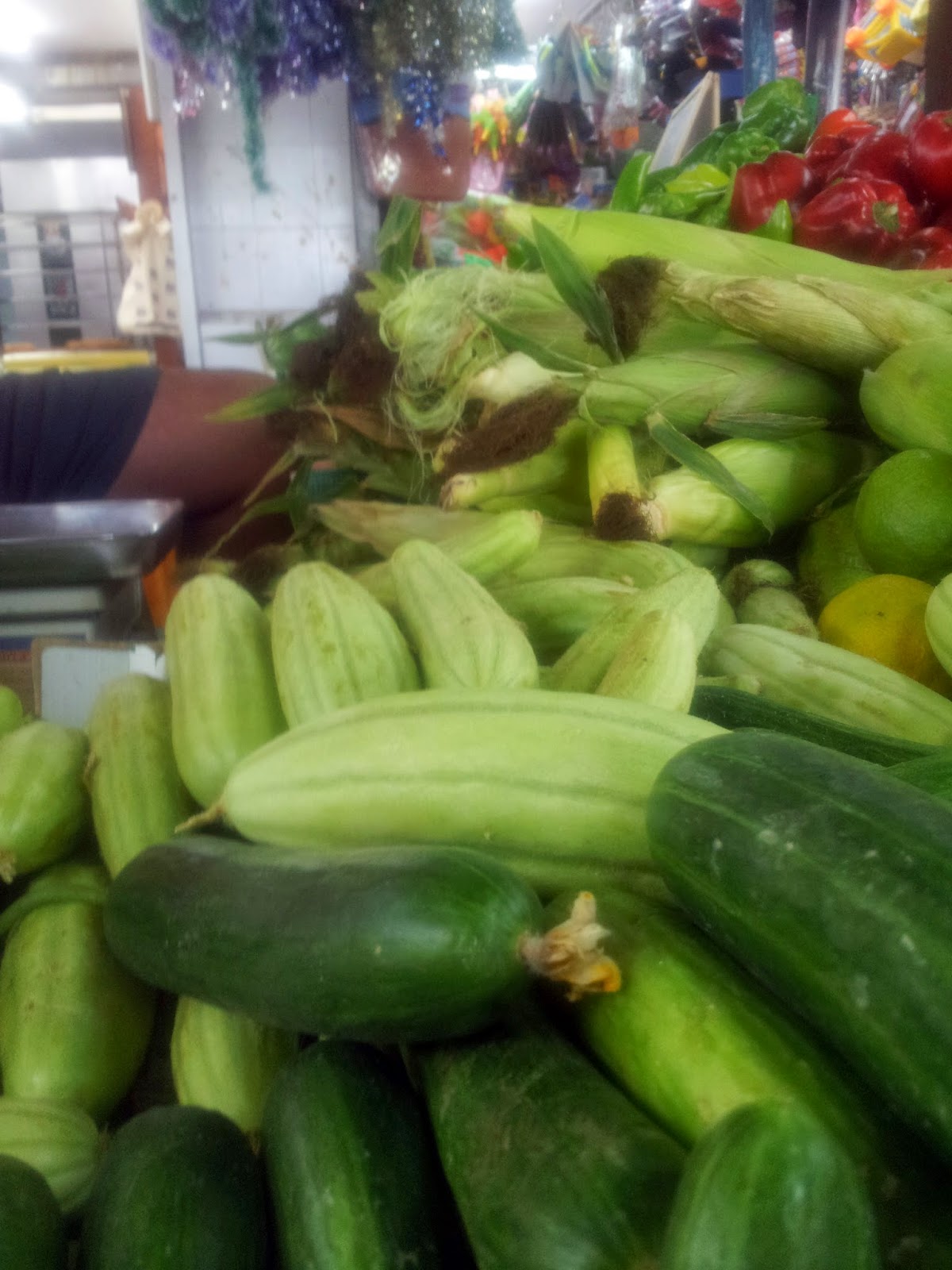 It's difficult to see in this image, but they are slightly fuzzy and have a more rotund figure than regular cucumbers, besides the obvious differences in color.

Taking my loot back home, I examined the Faqus in more detail. 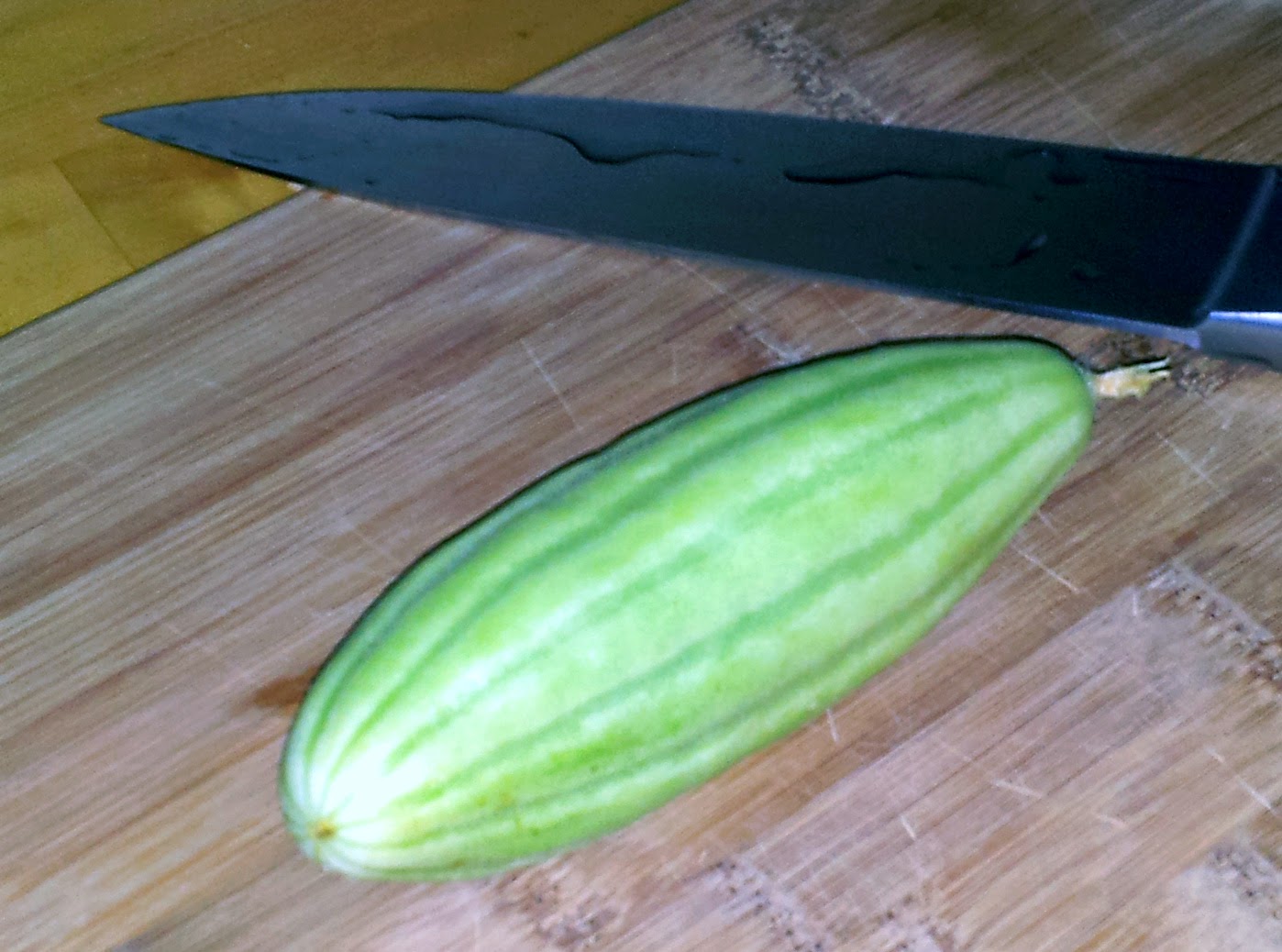 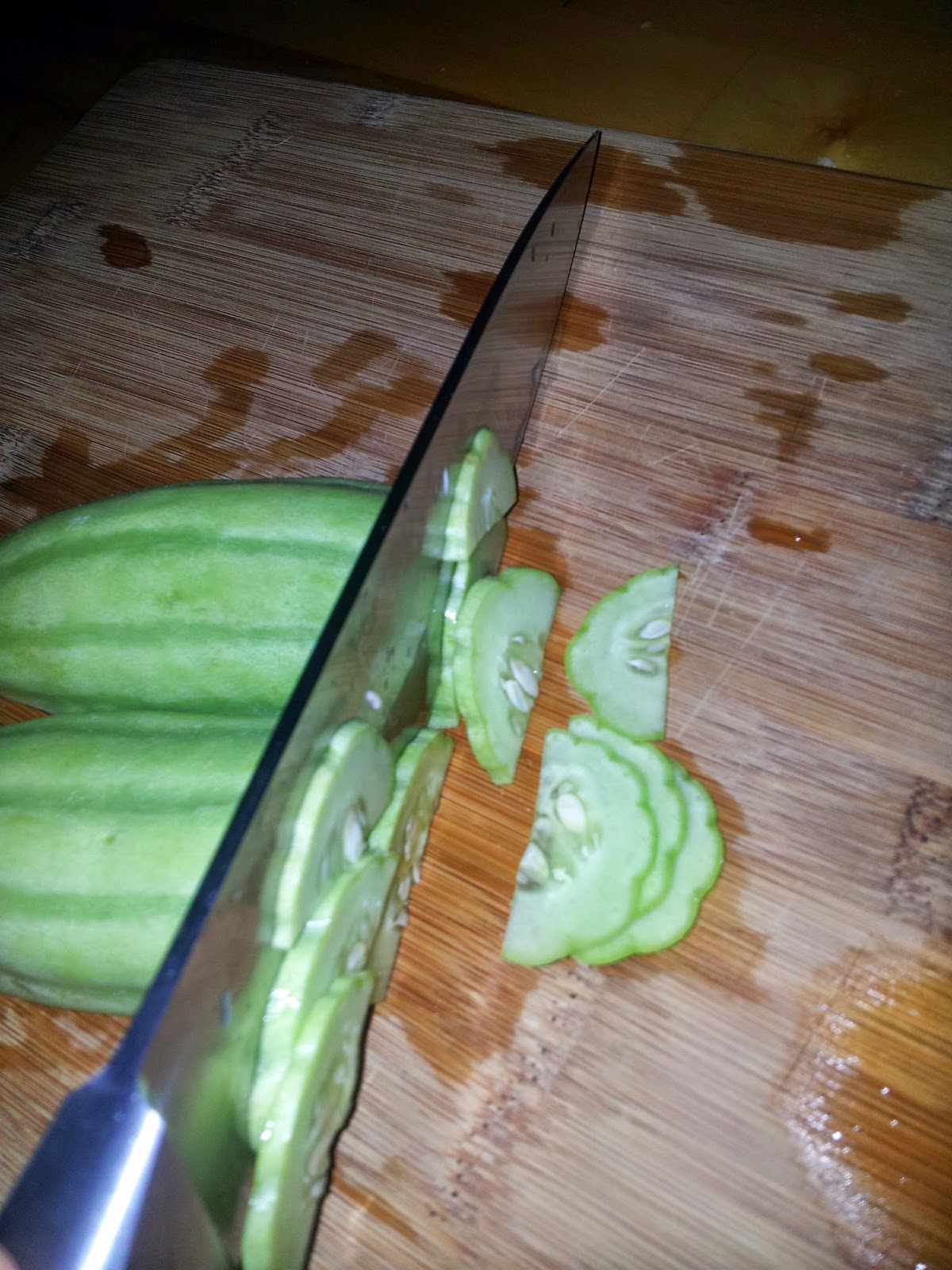 Besides the obvious similarity between the Faqus' seeds and The Mouth of Sauron's teeth its was very firm, slightly sweeter than a cucumber, and its outer skin (after I've washed and toweled it off to get rid of the fuzz) reminded me of a very thin layer of melon rind - but in a good way! All in all it was very tasty.
I cut it lengthwise and then into thin slices, and mixed it with the figs, mint, some lemon juice, olive oil and sumaq. 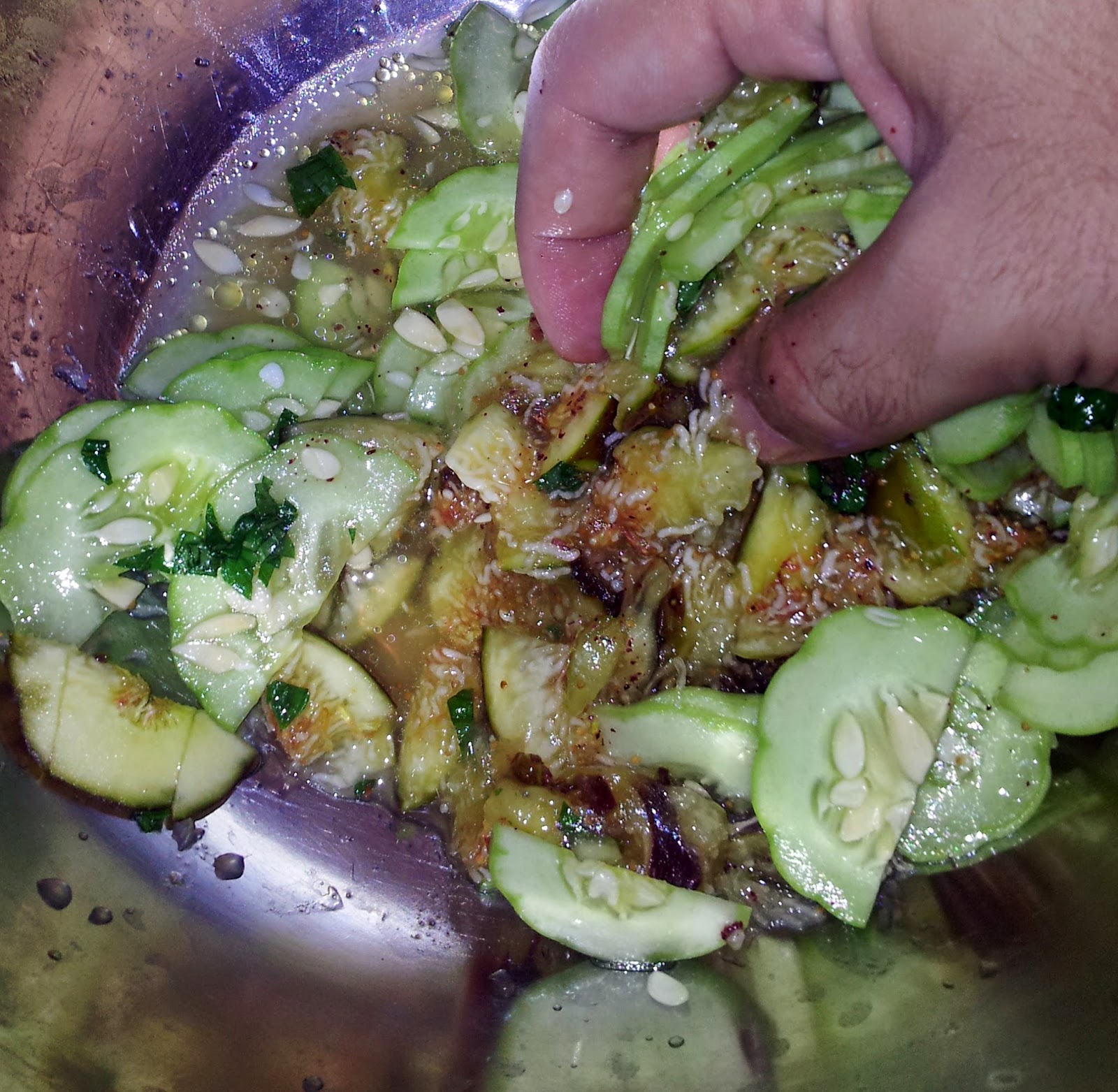 The resulting salad was astonishingly good.
The sweetness from the figs mixed with the coolness of the Faqus and mint, alongside the acidity and tartness from the lemon and sumaq created a super refreshing salad which was a huge pleasure to eat.
Served alongside cubed trout fillet in a quick salt and lime pickle, this was one of the better (and easier) meals I've treated myself to lately. And so should you! 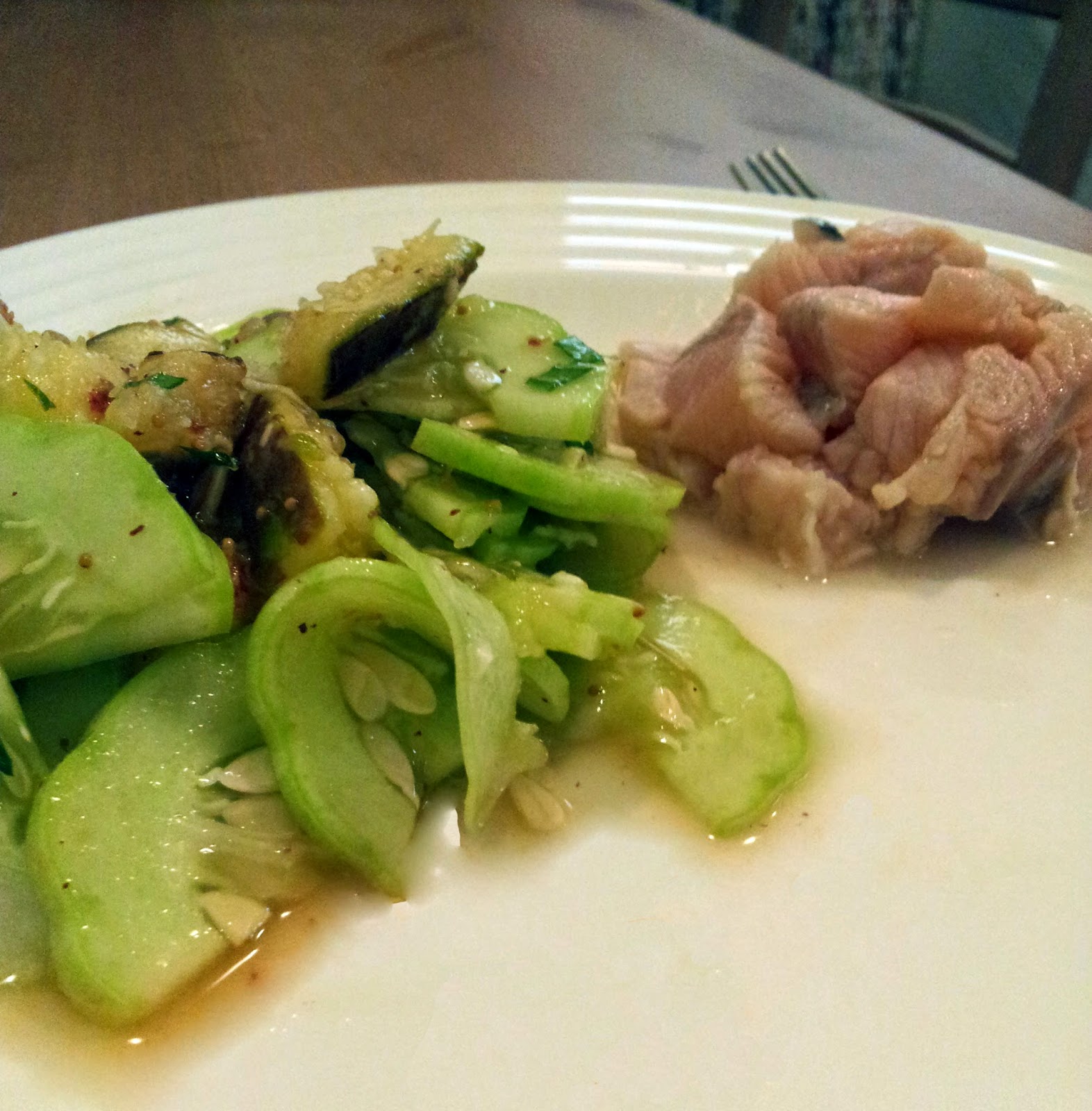