So over the past month or so, I've been travelling the US of A with M., my wife.
M.'s starting a prestigious Ph.D program in Chicago, and so we've decided that before we settle down in the Windy City, we should  tour the country a little bit, meet friends and see what there is to see.

Our trip took us from Dallas to New Orleans, then up the Mississippi to Memphis, then St. Louis, a brief interlude in Chicago and then back to the Mississippi in Minneapolis.
From there we headed back to Chicago, where I currently am. In a few days I'll be heading back to Israel to finish my goddamn degree, and M. will stay here. In about a year (not counting visits) I'll fly back to Chicago and settle down here for the next few years at least. As M. is now on official university business, I've found myself with a little bit of free time and thought I'd update this thing with the culinary aspects of our trip.

We stayed in Dallas with some polyamorous, goth artist friends whom I've taught to prepare Israeli/Palestinian-style Turkish coffee (Red Nahlé, if you're curious) tahinni and derivatives thereof (El-Gamal brand, of which I've brought them two industrial sized tubs - which they ate with Doritos, of all things) and shakshuka, all of which we ate between naked pool parties and excursions to classic Texas diners (chicken-fried steak covered in white breakfast gravy and sunny-side-up eggs, served with southern biscuits. Never again.) and all-you-can-eat sushi buffets (Never. Again.).

From Dallas we flew to New Orleans, where the best thing I ate, just like the best music we heard, was on the street, near Jackson Square.

New Orleans is an amazing city. The damage inflicted by Katrina, even ten years after the storm, is palpable almost everywhere you look; broken sidewalks, boarded-up buildings, overgrown lots and damaged masonry are prominent, and many of the city's denizens do not seem well off. Nevertheless, the French Quarter is filled with music, the Garden District is buzzing with chic entrepreneurial businesses and the avenues in the less "touristy" areas can be surprisingly interesting.

After walking for about an hour down dilapidated sidewalks in the Tremé neighbourhood from our AirBnB apartment towards the river, we suddenly hit the Quarter - Bourbon street. Being famished and unsure of where else we could eat, we settled on a tourist-trap looking place on Bourbon and ordered a sampler dish of local staples - red beans and rice, Gumbo and crawfish Étouffée. Despite the cheap venue, these were all surprisingly good, as was the s'mores bread pudding we had for dessert. Still, after getting to know the Quarter and its surroundings, I would not recommend staying on Bourbon a moment more than you have to. The city has a lot more to offer than the tourist traps on that street and your time and money would be better spent in other, more interesting, places.
That's not to say that a search for the "Authentic" should be the driving force behind your trip to New Orleans. Some tourist traps are definitely worth your time - the Voodoo museum, for instance, as well as Magazine street.
NOLA being what it is, it's impossible not to eat well there - we had some great mushrooms and grits at The Green Goddess as well as veal covered in a crawfish sauce at Adolfo's on Frenchman street - but the two most enjoyable consumables we ate were right near Jackson Square, were very cheap and unfussy, and were accompanied by the city's biggest drawing factor in my opinion - its street music.
The first was beignets and chicory coffee at Cafe Du Mond. Simple, sweet and sticky, this was a perfect interlude between our wanderings in the Quarter, and very satisfying.
They're open 24/7 so you really don't have any excuse not to try them out at least once when you're in the city. We went every day.

But after all of the expensive restaurant food and fancy bands we heard play in smoky bars, the absolute best experience we've had in both respects was sitting right in front of the St. Louis Cathedral, listening to the amazingly talented street musicians jam on the benches around us, and eating a home-made tamale sold by a Mexican man selling them from a greasy plastic bag.


Two other places that cannot go unmentioned are the Corner Muse and Stein's Market & Deli on Magazine street.
I cannot stress enough how cool the Corner Muse is. We walked in after walking there from the Quarter on a very hot day. We were tired, peckish and very hot, and so the sign saying "Snowballs" (also known as shaved ice) beckoned to us. Inside, an extremely colourful décor greeted us, filled with school kids on their way back home, all eating and slurping down even more colourful snowballs. Vanessa, the owner, knew all the kids by name, made all the fruit syrups flavouring the shaved ice herself and generally made the place feel like an idyllic, Disney-channel like place where overly saturated, sweet childhood memories are made. Just the atmosphere itself was great, but so were the snowballs, and I wish I could go back every week.

Stein's Deli was very atmospheric as well, but in a very different way. Cynical, self aware, hipstery and unapologetic, they had a dazzling array of beers and sausages. I decided to try a New Orleansean staple there, the Muffaletta, and was not disappointed. If you happen to pass by, drop in and order something, you won't regret it.

Up next - Jackson, Mississippi - also known as Buttfuck, Nowhere and Why Did I Come Here, Oh Yeah I Was Just Leaving - as well as Memphis, Tennessee, the surprisingly awesome St. Louis, Missouri and some recipes.

Posted by Unknown at 9:19 PM No comments:

So a piece I wrote got published over at TheCultureTrip.com. Head on over to read about ethnic street food, and let me know what you think!
The comments so far are kind of funny. The first commenter wrote "Beautiful food of Palestine..!" and someone commented on that and wrote "Beautiful food of Jewish Palestine." This is funny to me because the whole article is about food that is specifically not from here.
Posted by Unknown at 11:05 AM No comments:

Ok, I guess this is officially a fetish now: 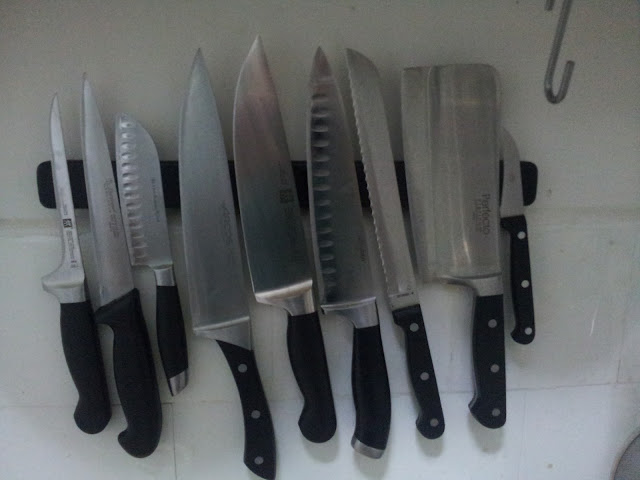 Posted by Unknown at 2:18 PM No comments:

This should have happened a LONG time ago.

Just found this video series by Harvard U - it's a collection of lectures on the science of cooking. Really interesting stuff!

I don't eat at McDonald's.

The only things their burgers fill me with is sadness.
Their meals are unsatisfying, and generally feel like a waste of bovine life.

It may therefore surprise some readers that once a year I make a pilgrimage to my local McDonald's and willfully order a McRoyal.
It may surprise you even more to read that that annual tradition is reserved for Passover, but hear me out.

First, a little background for the benefit of the uninformed.

As you probably know, bread is considered un-kosher during the week of Passover. This culinary law is due to the tale of the exodus and how the Hebrews did not have time to let their bread rise before fleeing Egypt. In memory of this anecdote, Jews can only eat unleavened bread during this time - hence the invention of Matzo bread.

As Israel is a Jewish country, there is a law prohibiting the sale of bread during the Holiday. This means that most businesses serve bread substitutes during this time. This includes major fast food chains like McDonald's, that serve their sad, grey patties on even sadder potato dough buns (not to be confused with American potato bread buns that contain some regular flour - these, to the best of my knowledge, contain either no wheat at all, or matzo flour) - tragic, chewy, foam-like abominations that barely feel digestible.

Why then, of all the days of the year, would I actually want to visit McDonald's on the week their food is even worse than usual?

To celebrate the absurdity of institutionalized religious tradition, of course.

Yes - it's possible to order a kosher (for Passover) cheeseburger.

When The System offers opportunities to openly mock it like this, I can't help but do so. Year after fucking year.

Posted by Unknown at 7:22 AM No comments:

It's the end of the strawberry season here in Israel, which is the perfect time for making jam. Prices are low, the fruit are beautiful and the farmers don't bother with pesticide.

Here's my take on red jam, in which I use hot chilis, ginger and tomatoes alongside the strawberries to achieve a more complex and somewhat surprising flavor. The resulting jam is sweet and at first feels like traditional strawberry preserves, but finishes off with a warm chili-ginger flavor. 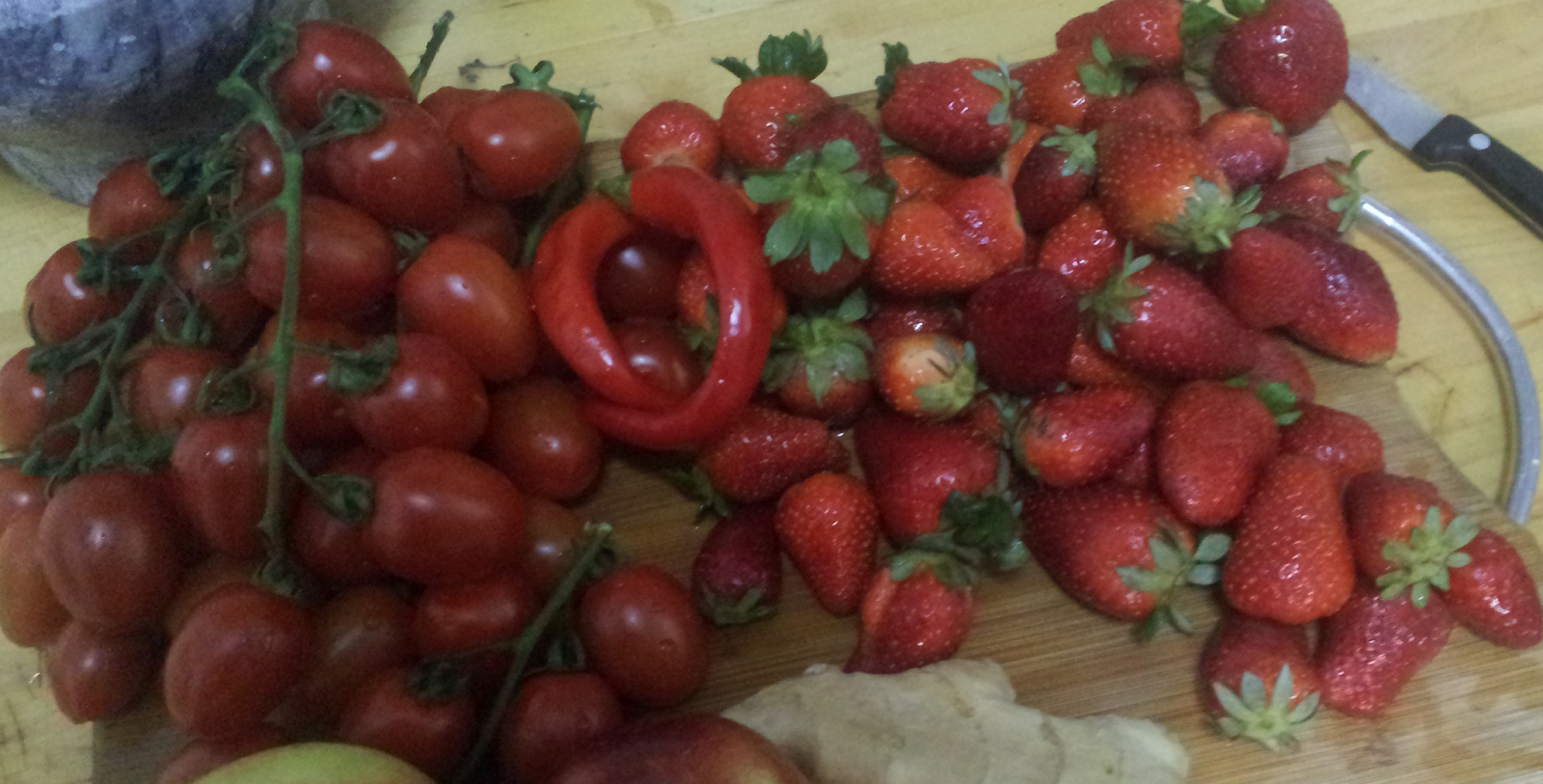 Thoroughly wash and dry your fruit. Cut the strawberries and tomatoes into a size that's approximately 3 times larger than the size you would like the eventual fruit chunks in your jam to be.
Chop the ginger as thinly as possible - it will not shrink much during the cooking process.
Cut the chilies down to small cubes. The more seeds and membranes you keep in your chilies, the hotter the final product will be. One chili is barely noticeable, three would make the jam almost chutney-hot. Pour the cut fruit and vegetables into a large pot, and add the sugar. Mix well until you can't see any dry sugar. As the produce sits, the sugar will draw out a substantial amount of liquid into the pot. While this is going on, cut the apples - make sure to leave their skins on, as they are the most pectin-rich part, and will help the jam to congeal - and add them to the pot.
Stir well, and light a low flame.
Stir frequently, making sure to scrape down the sides and bottom, and let the mixture warm through and bubble.
What we're looking to do here is to reduce the liquids in order to thicken the mixture, as well as to cook the fruit and draw out as much flavor as possible from them.

The amount of time the cooking process will take depends on the size of your pot, the strength of the flame and the amount of liquid your fruit originally contained.
You can check if the jam is ready by taking a small amount of the cooking liquid in a metal teaspoon and placing it on an ice cube to cool the liquid rapidly. If the liquid has reached a thick, jelly-like consistency when it has cooled, your jam is ready.

Take the pot off the heat and pour your jam into sterilized jars. Make sure to do this while your jam is still hot so that your jars won't crack and because it's easier to ladle out when it is still warm and runny.
Store in a cool, dark place, or in the fridge. Posted by Unknown at 5:01 AM No comments: