Someone very close to me has recently turned Vegan.
Imagine my dismay. IMAGINE IT.

Is it imagined? Good.

Of course, your imagined dismay is probably much worse than my real dismay, because I'm looking at this as an opportunity to flex my culinary biceps.


No eggs or dairy?

Sure, pancakes aren't a problem!


Once you get the basics of this recipe down, you'll realize that even wheat is optional.

I've made these pancakes with ground-up oatmeal instead of wheat flour on several occasions.
I have no idea if that makes them gluten-free, but if it does, then yaaaaaaay.
This is a very pliable recipe, and that's what makes it great.

(I can't believe I'm writing about gluten-free vegan pancakes. My next post is so going to be about live fish in pigsblood or something. I WILL make this up to you, I promise.)

(Calm down you vegans.)

That's not to say you can't add eggs or dairy. This is a pretty great pancake recipe in general, and yields good results no matter what you throw into it. The basal form of these pancakes is vegan, but they can be modified in many ways. I'll go into that at the end.

And throughout the recipe.

In a mixing bowl - combine the dry ingredients.

I know, I know, I didn't give ANY type of measurements.

The truth is, I have no idea what the measurements are. I always cook by eye, and I'd like to teach you how to do so as well. Annoying? Maybe. But it ensures you understand what you're doing and why, and thus prevents you from seriously fucking up.

So what are we looking for when combining the dry ingredients?
We want the flour to remain the dominant thing we see when they're all combined.
Why? Because pancakes should be mostly flour.

If you're using brown sugar, you should see some specks of brown in your combined dry ingredients, but not a whole lot. The salt should be unnoticeable by eye, which isn't saying a whole lot since flour is white, but if you're cooking for two or three people, if you've thrown in more than two hefty pinches of salt then you've gone too far.

Don't be afraid to use a lot of baking powder. When it warms up it creates tiny gas bubbles, which make the pancake fluffy and airy. Our batter is heavy, and needs a lot of help to gain some lift.
If you've made regular pancakes before, consider using double the amount you'd normally use, since whisked egg provides a lot of lift in the traditional recipe.
If you're cooking for two or three people this should be around three teaspoons.

No matter what you've thrown in to the dry mix, it should look homogeneous before we add the wet ingredients.

Now that the dry ingredients are combined, we can get them wet.

Our wet ingredients have two duties.
The first is to make a batter, but the second is to substitute the eggs in traditional recipes, which add flavor and help the batter hold together.

This has far reaching implications, because you can use a lot of things to replace eggs.
We're making regular, plain old pancakes right now, but you could easily throw in pumpkin puree, mashed sweet potatoes, chocolate pudding, bananas or feces (don't throw feces in the batter).
The idea is to reach egg-like consistency without eggs.

Start by adding the oil. We want an amount that won't be able to wet the entire dry mix on the one hand, but that will be noticed once the other wet ingredients are introduced on the other.
In my mind the oil kind of replaces the yolk, but that's probably bullshit. 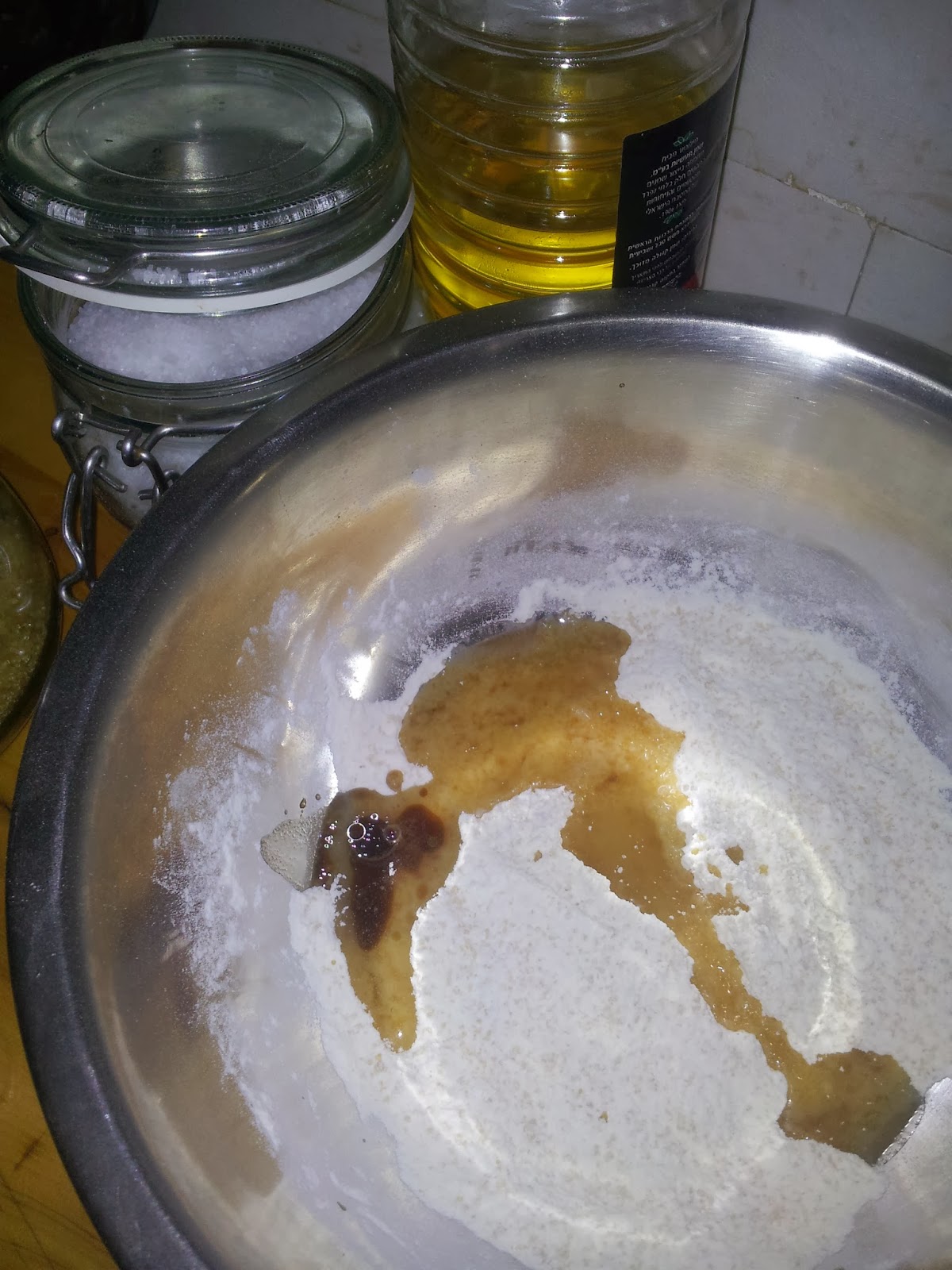 Then add a few drops of the vanilla extract, followed by a small amount of milk substitute.
If you want to add booze to your pancakes now would be the time. Barenjager comes to mind.
Also, corn or agava syrup works well, texture wise, but can easily be skipped, which is why I included neither in the basic ingredient list.
This combination should now be similar enough to eggs with a little liquid to fool the dry ingredients into thinking this isn't a vegan recipe. 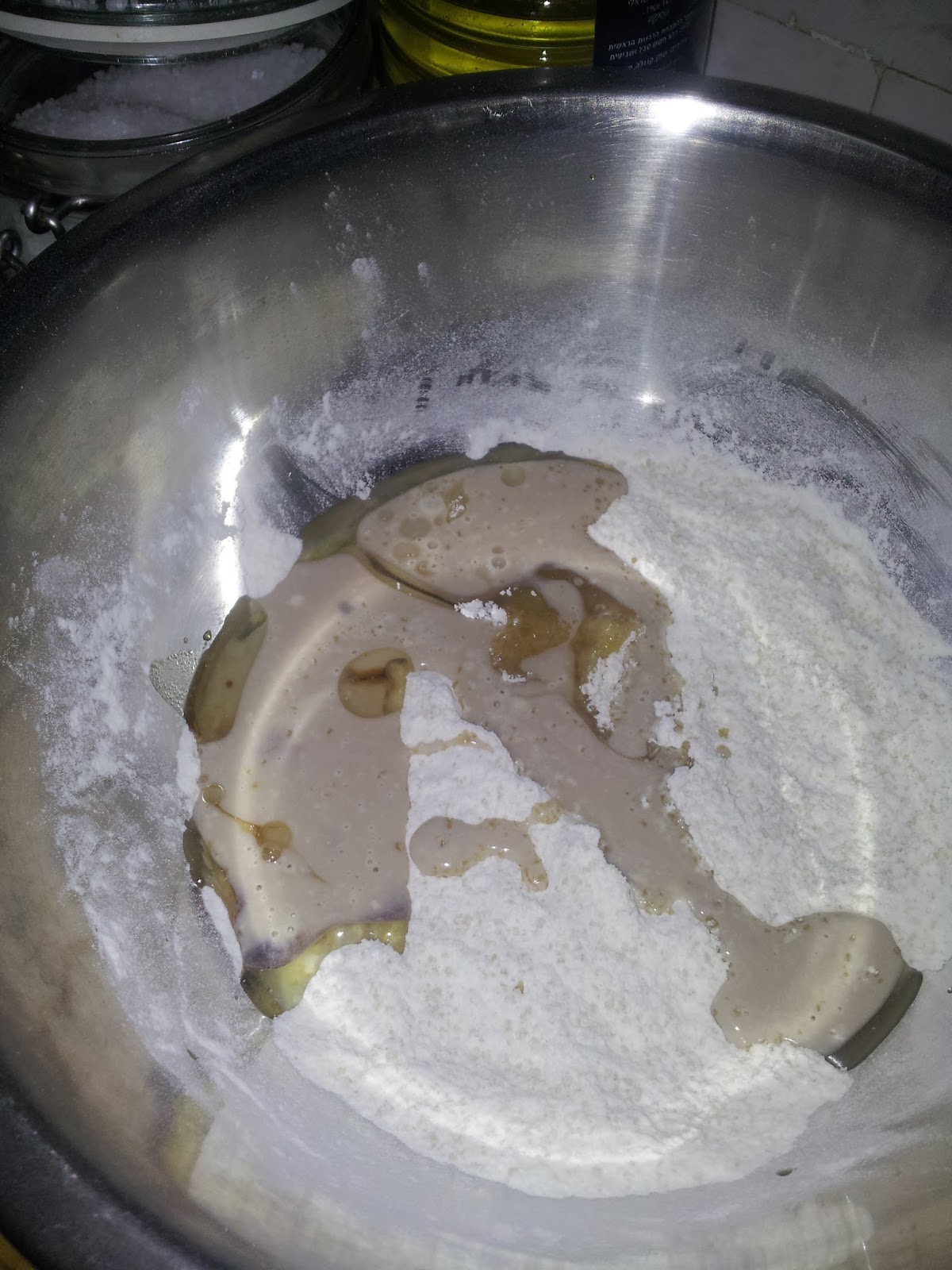 Your batter should now start looking like a dough, and bunch up at the end of your whisk. This is OK.
We don't want our batter to be too runny, so we'll work up from being too dry to being just right, as that's easier than working down from too wet. 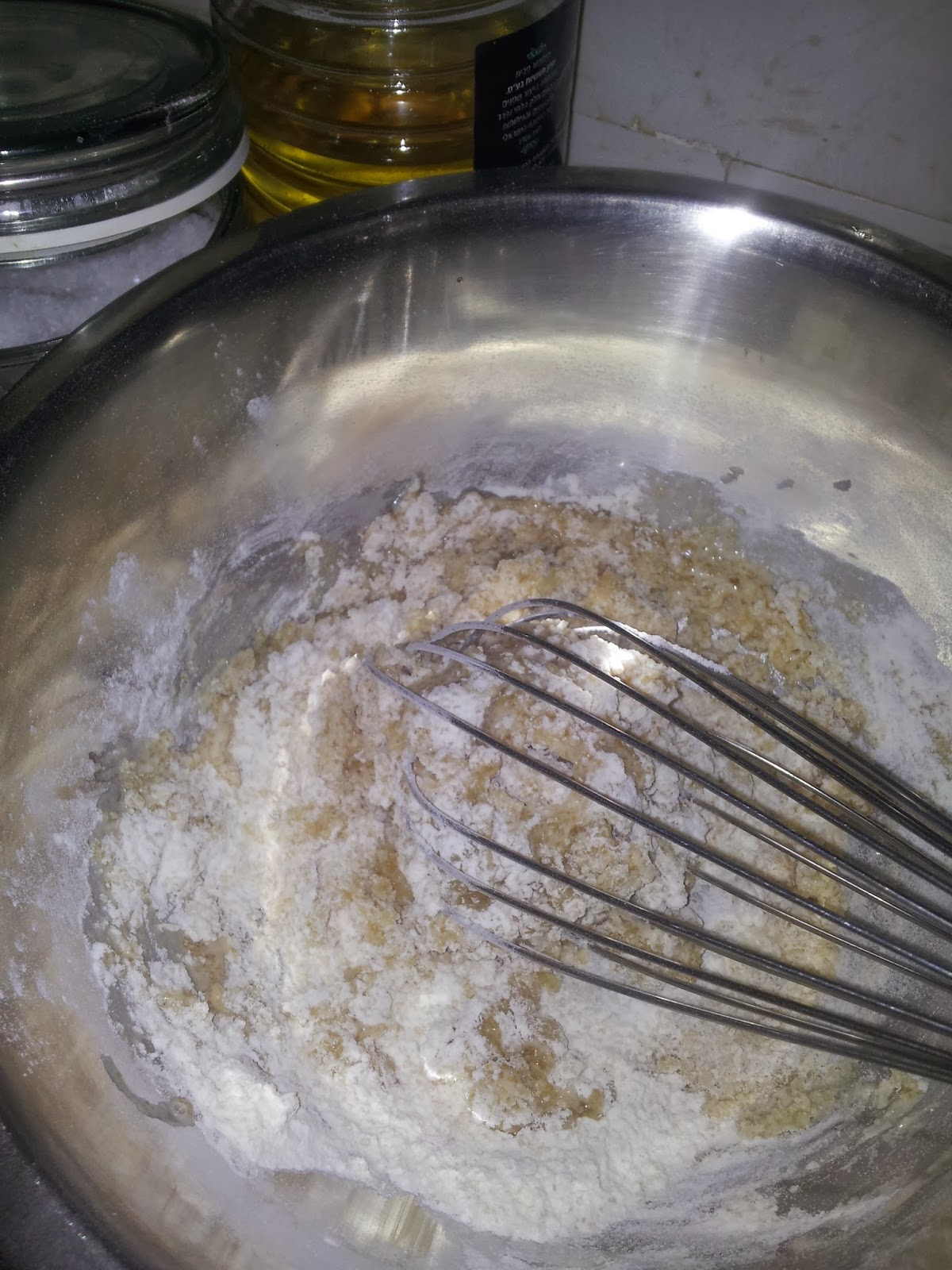 Slowly add more milk liquid, until the batter loosens up a bit. It should no longer bunch up at the end of your whisk, but should retain some pull and some "heaviness".

That's it! Our batter is ready. 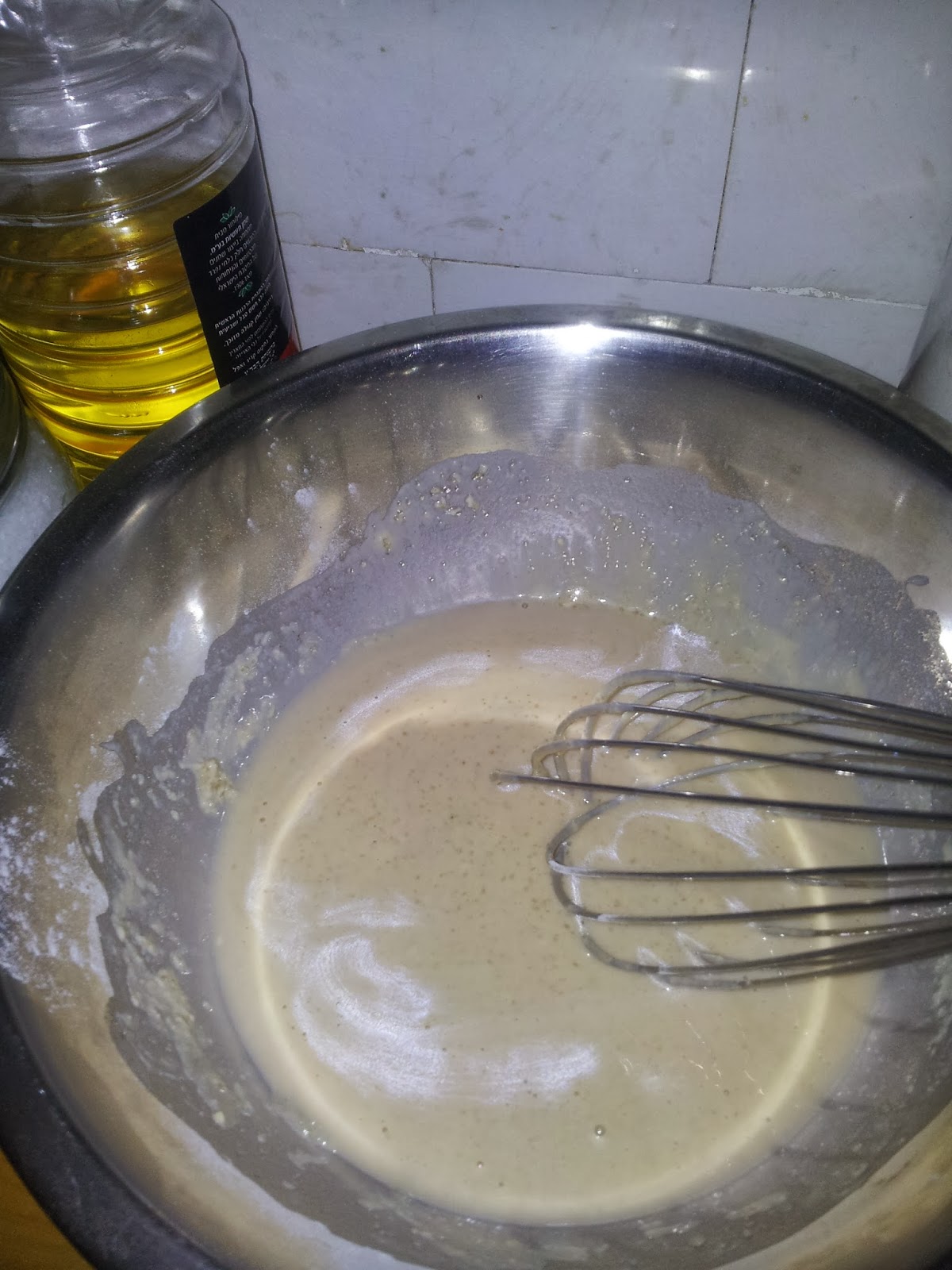 Heat your pan over a medium flame. Once it's noticeably hot when you place your hand over it, but not unbearably so, pour your batter. It will expand a bit, so if you're going for a particular size, stop pouring a little before you've reached the desired circumference.

Now we must have patience.

There are two processes happening at once here.
The first is the cooking of the batter. As the batter heats up, it loses moisture and starts bubbling thanks to the baking powder. It eventually loses enough moisture it begins to set - hopefully around the bubbles - and thus gains the airiness we desire in our pancakes.

The second thing that's happening is browning, both of the flour and the sugar which should begin to caramelize. This makes our pancakes look like this: 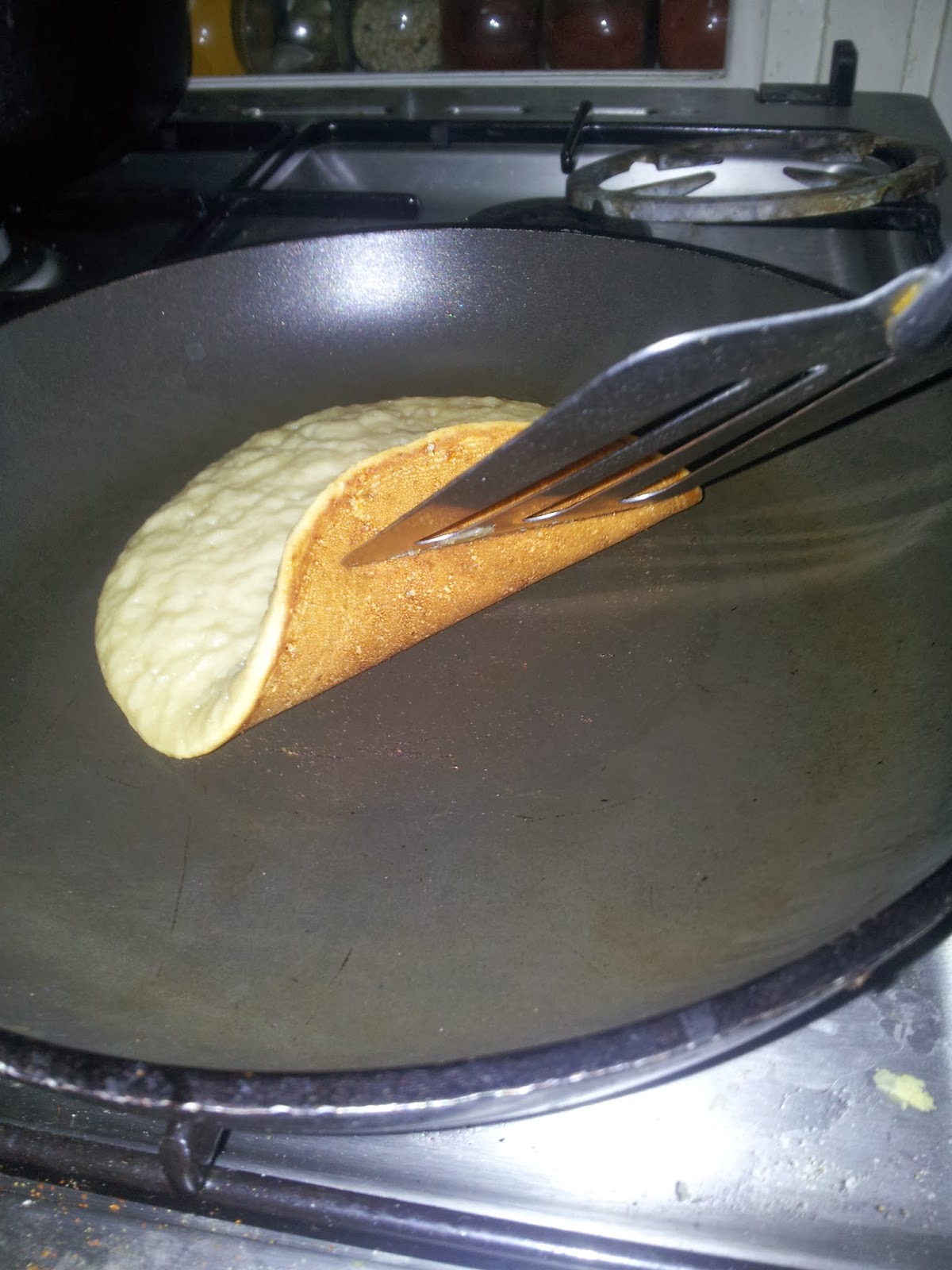 If you don't wait long enough before flipping the pancake, the bubbles won't set and the pancake won't get a tan.
If you wait too long, however, the sugar will begin to burn and your pancakes will taste like charcoal.

So how do we know when to flip?

First, look at the batter.
It should be bubbly all over when you flip it, and almost dry around the edges.

Second, use your sense of smell.
Can you smell something burning? That's probably your pancake (although it could be a stroke). A light burning smell that's just starting to emerge from the pan doesn't mean you have to throw away what you're currently cooking, as most likely it's just the edges of the pancake and it's still edible. Hurry and flip it over. If it's started burning before the bubbles begin to set, you should lower your flame and lift your pan in the air to allow it to cool off a little bit.
Being an impatient tinkerer, when I cook pancakes I am often tweaking the gas knobs, lifting the pan, moving the pancakes around different hot and cold spots on the pan's surface and bouncing on my heels - but all of these aren't really necessary if you've got your pan at the proper temperature.

Once your pancake is flipped it doesn't need more than a few seconds to lightly brown on its underside. lift it up a bit and check it's set, and transfer it to a serving plate.

That's it!
These pancakes will keep well for at least a day in the fridge and can be reheated in either the oven or a toaster. 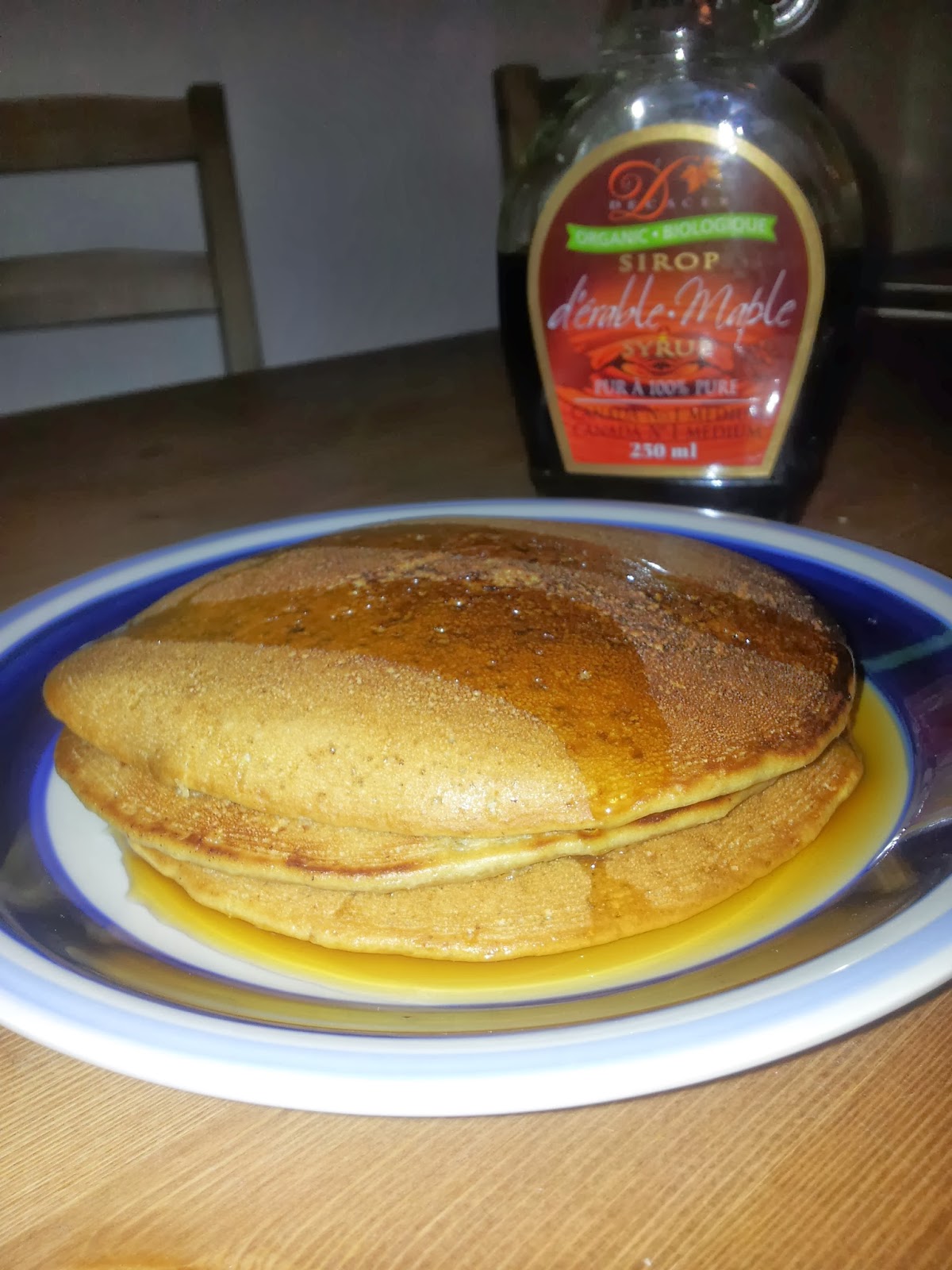 You can modify this pancake in a lot of ways. I've detailed some of them in the text above, but I'd like to offer a complete non-vegan recipe here.

Instead of the milk substitute, add yogurt and milk (making sure to add the milk gradually, like we talked about), along with eggs. Keep the oil (which can be melted or clarified butter), don't butter the pan, do everything like the above recipe, and you're in for some pretty awesome traditional pancakes.

I also like to add small cubes of briny feta cheese (called Bulgarian Cheese here in Israel) to the pancake before I flip it.

Jesus, this turned out to be a really long post for a really simple recipe!
Let's sum up, shall we?

Mix flour, sugar, baking powder and salt in a bowl until homogeneous.
Add oil, vanilla extract and milk substitute. Mix into a thick batter.
Dole out batter over hot nonstick pan, and flip when bubbly and starting to turn dry around the edges.
Serve.