At least, the first in a while.

While Tel Aviv's Hebrew character is certainly an important aspect in its description, it is also a City, with a capital C, which means a whole lot of things.
One of those things is diversity.
There is a considerable population of migrants in the country, and, happily for me, a large foreign community has formed in the southern side of town.

Like any migrant community, they've brought their food over with them, which means that although the Israeli palate can be quite conservative when it comes to spices, condiments and seafood, authentic versions of these can still be found here, catering to the foreign community.

So Noam (my photographer friend) and I decided to go on an excursion to the southern part of town, pick up some exotic ingredients and experiment with them at home.

But not before we picked up some of the best Dim Sum in the country.

I love this neighborhood. Yes, it is shady, and it's not exactly safe to walk its streets after dark, but where else can you find dried squid and black Chinese vinegar next door to a Sudanese restaurant?
Not to mention that this is the only place I know in the country where one can easily find cassava root and plantains.
It's small, run down, unknown, hardly visited by Israelis and, as far as Southeast Asia goes, caters mostly to Thais and Taiwanese, but in my mind it's the city's Chinatown, and I can't help but love it.


As this post is an initial probe into the culinary curiosities this part of town has to offer, I thought I'd buy some ingredients which are pretty ubiquitous and play around with them.

I also bought pork tenderloin and heart. The tenderloin isn't that interesting, but ever since I laid my eyes on the pork hearts at the Kingdom of Pork butchery I knew I had to buy one and play with it. On the bus back home I started wondering how I was going to bring all of these ingredients together into one coherent recipe. I've never cooked with Galangal or Kaffir lime before, and never even tasted salted shrimp fry, but once I actually gave it some thought it became pretty obvious that the dish was going to be a curry of some kind - and so, I proudly present my improvised green curry recipe.

I've never made green curry before, but I did know that its base contains ground dried coriander seeds, ginger and greens like parsley, coriander or basil. Incorporating the vinegar, shrimp fry, Galangal, Lemongrass and Kaffir lime leaves into that was just a matter of grinding up the dry spices together, grinding the wet ingredients together, and mixing the two.

Lest we forget our plantains, I decided to make oven-cooked plantain chips as a side.

I cut the plantains into fairly thick strips, added olive oil and coarse salt and threw them into the oven. And that's it!
At first I was a bit worried that chips won't serve as an appropriate side for a curry, and that maybe rice would have been a better choice, but the sauce worked beautifully with the plantains, and I will definitely repeat this combination in the future. 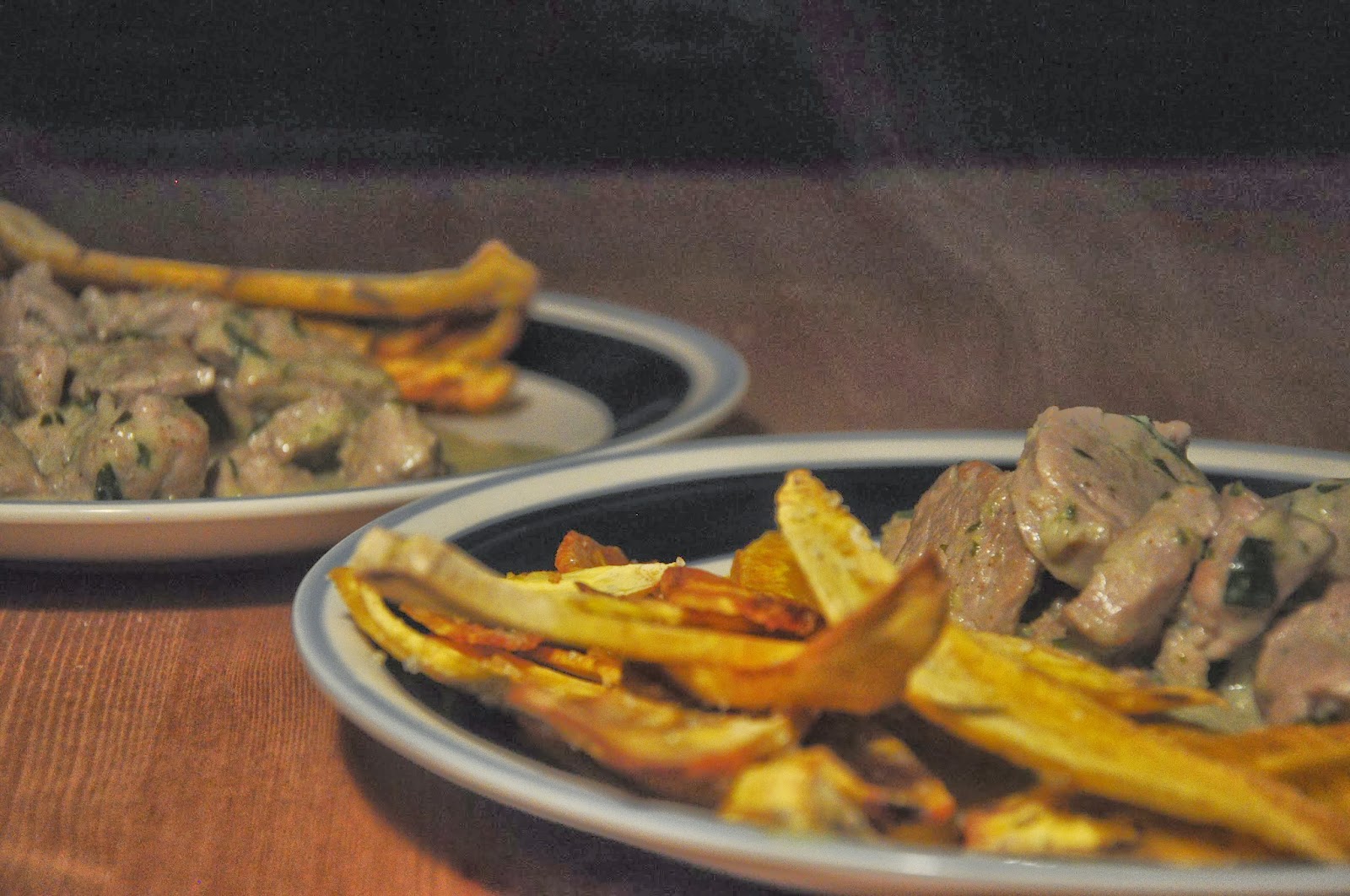 I feel this recipe would work great with fish.
The only thing I would change is when the protein is added. With fish, I would skip the flash-frying phase and add the meat directly to the cooking curry sauce, and let them poach in it.

For the curry:
Using either a mortar and pistil or a spice grinder combine the dry curry ingredients until they form a uniform fine powder, and put the powder aside.

Using the same mortar and pistil or a stick blender combine the wet curry ingredients until they come together as a pesto-like paste. Add the powder and combine both.

In a hot wok or deep pan flash fry the pork tenderloin after it has been cut into bite-sized portions with a bit of canola oil and kosher salt until it is cooked from all sides. Remove from the wok.

Add the green curry paste to the pan, stir and quickly add the coconut cream. When the paste has dissolved into the cream's liquids, add the pork and let all ingredients cook for a few minutes.

For the plantains:
Remove plantain's skins and cut into thick slices. Place on a baking sheet with parchment paper. Salt liberally and pour olive oil on the slices. Place in a pre-heated 230 degrees Celsius oven and bake until crisp and golden.


Let me know if you try this recipe, or if you've made green curry before and would do anything differently!

Finally, enjoy this sunset I saw from the Yarkon bridge this Friday: 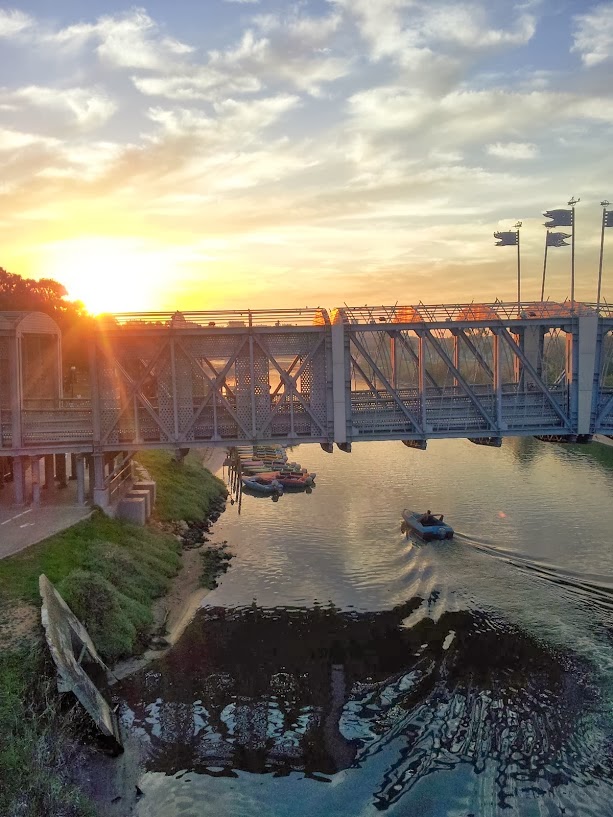